I’ve been at Rumpus for a few months now and have learned lots about PR, social media, and content creation. However, surprising to me, I’ve also learned about placemaking and had the opportunity to flex my geography and business A-Levels. Learning about placemaking throughout my A-levels, I didn’t think I’d get to use it after college but here we are!

My geography and business teachers taught me different definitions of placemaking. In geography, placemaking is a socio-economic process where decisions are based on the local economy, physical geography, and cultural activities. Whereas in business, placemaking is a multi-sided approach to public spaces to improve the local community whilst attracting new businesses. But if we combine them and make it simpler, placemaking is creating quality places for people to live, work, play & learn.

Manchester has seen a whole range of placemaking projects over the last few years. These projects likely contributed to the city being named the third best city in the world! The same report also found Manchester the 3rd best city to work in the UK and the 11th best city to visit. I would disagree with all that and say it’s the number one but I am biased because I’m born and bred in Manchester!

I’ve spent the last few weeks researching placemaking projects in Manchester and went to explore these projects in-person to gather some content.

One of Manchester’s proudest placemaking projects is the inner city, New Islington. The 20-year regeneration has transformed the area into a thriving community. This includes homes, workspaces, shops, and some incredible architecture alongside the marina.

Historically part of Ancoats, this area was known to be the worst estate in Manchester with a very negative perception to the public. Formally known as the Cardroom Estate, developed in the 1970s to replace the old Victorian housing. However, by the mid-1990s, 50% of the houses were empty or occupied by squatters. The regeneration project started with the collaboration of the developers, designers, architects, and local people who produced a plan for New Islington’s future. With a new school, health centre, restaurants, and plentiful terrace housing with balconies and public gardens. Even revamping the marina has boosted the current community and attracted new people into the area – honestly, why wouldn’t you want to move there?

Introducing new modern, space-saving buildings have influenced similar projects around Manchester and the UK. Changing the concept to modern, space-efficient buildings with a new positive impression, its success has created a ripple effect not just through Manchester but the rest of the UK for more built environment PR to do the same. 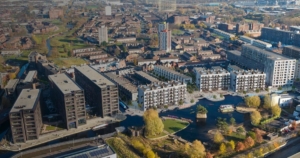 A more recent placemaking project in the city is the Mayfield Park project. The plans plotted a transformation to the empty site next to a great venues, Escape to Freight Island. It’s perfectly located in the heart of Manchester, a five-minute walk to Piccadilly station.

The park is designed to be a fun and unique tourist spot, while also boosting biodiversity. Future plans also include space for residential dwellings and commercial outlets. Mayfield is being built by, and for Mancunians so keeping the history is key - during construction, the development has uncovered some forgotten Manchester history and revitalised a hidden section of the River Medlock. 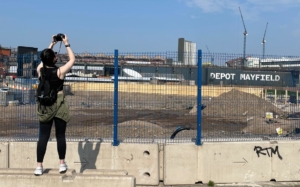 Dubbed ‘Canary Wharf of the North’, Spinningfields is a spot in Manchester that has been around since the early 2000s. Starting out as a office area, it’s now a hot spot for bars & restaurants, and a must-visit for young professionals.

Tucked between Castlefield and Deansgate, it is one of the most successful regeneration projects in the UK! The whopping £1.5 billion project consists of 20 buildings, totalling approximately 430,000 sq metres of commercial, residential, and retail space. This modern lifestyle district has attracted international investment and has some big names set up in Spinningfields.

Placemaking is an important part of the built environment sector due to its ability to renovate a space. It an also enhance the quality of life for residents and visitors, attracting investment long after the project is complete. Placemaking has and continues to change and evolve city centres, including Manchester.

I can't wait to watch Manchester transform and continue evolving in the future. I hope to even play a small part in the promotion of these projects.

Today's #quoteoftheday is a motivational one to ki
Happy Friday Everyone! We've got that #fridayfeel
Smooch Shakes shout out 📣 Earlier this month o
Last week we were at Deansgate to cheer on Seddon
Apparently, it's #NationalBeerDay (on a Wednesday,
Young Altrincham Professional event is back, back,
We are supporting The Christie for the Seddon 125
Rumpus on tour ✈ Jade, our account executive, i
Follow on Instagram

We are always looking for talented individuals to join our team. If you like the sound of how we do things, then please get in touch or send your CV to: careers@rumpuspr.com